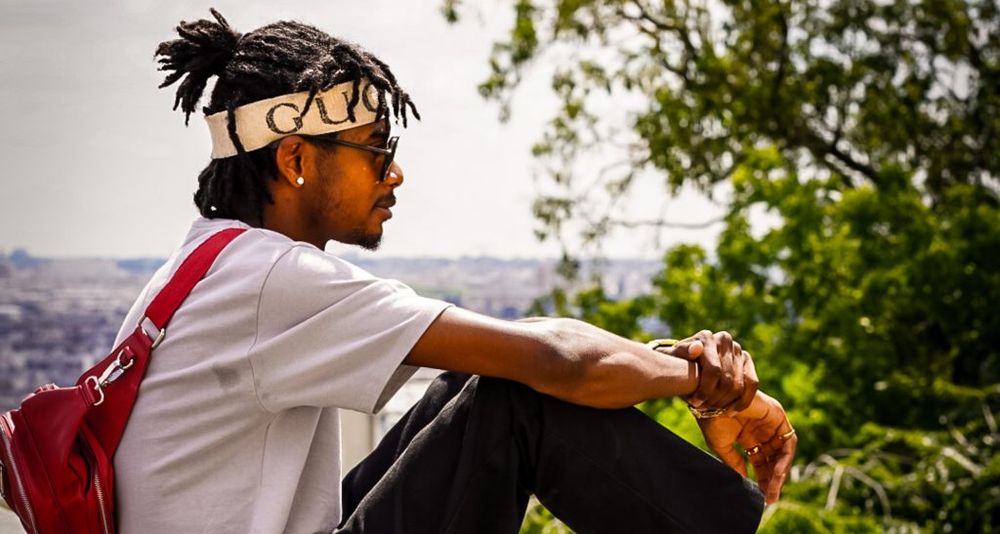 For ages, fashion houses, like Gucci, Prada and Louis Vuitton, had been relying on their physical stores to serve their rich and famous clientele. On top of that, most luxury brands believed that e-commerce was more suitable for lower and mid-price products. It wasn’t until a McKinsey research showed that 80% of luxury sales are “digitally influenced” that the fashion houses started to change their strategy. Once they realised the majority of their customers were looking for online inspiration during or after purchasing a luxury item, Gucci knew it had to step up.

Italian brand Gucci was founded by leather craftsman Guccio Gucci in 1921 in Florence. Up until then, Guccio was renowned for his high-quality horseback riding accessories. He started designing lifestyle products after he got inspired by the wealthy upper-class guests, whilst he was working at the Savoy Hotel in London. Up until today Gucci designs are still strongly inspired by Guccio equestrian background and Italian craftmanship, but they are rather described as eclectic, contemporary and romantic. The brand has a rich history and the reputation for serving some of world’s most early-day influencers such as Jackie O., Grace Kelly and Audrey Hepburn.

Underneath is the business model canvas of Gucci before 2015. 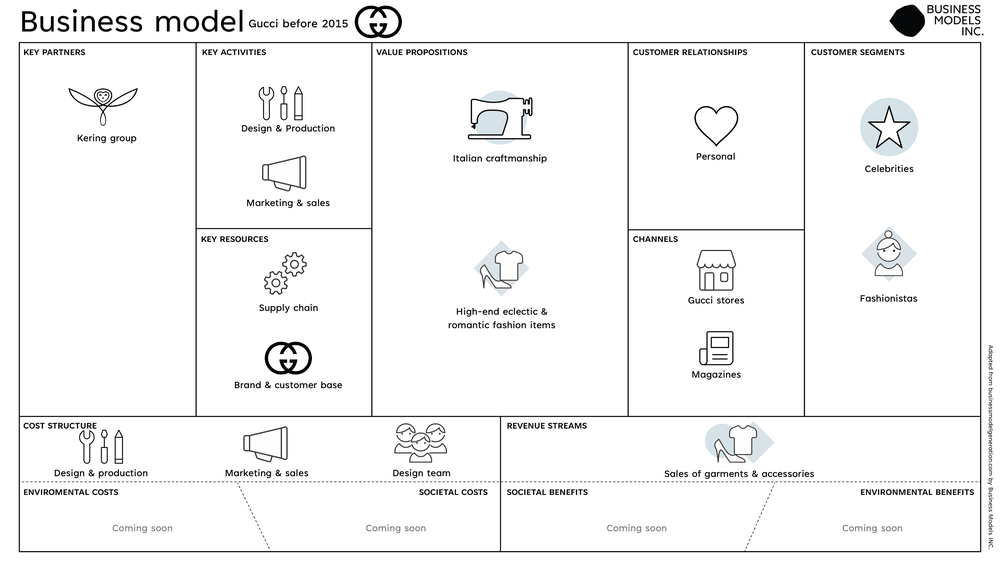 After two turbulent decades filled with family feuds and changing creative directors, 2015 marked the beginning of a new area for Gucci. When Marco Bizzarri became CEO and Alessandro Michele joined him as Creative Director the company quickly adapted their strategy.

First of all, the new leadership focused on transforming the company culture by creating an environment that empowers employees, encourages innovation and build upon diversity and inclusion. Second, Bizzarri and Michele shared a bold vision for the company where they wanted creativity to become the priority and online presence become as important as their physical points of sale: Gucci was to become the first legacy luxury brand to behave as a “digital native”.

A new narrative for a new customer segment.

Therefore, Gucci started focusing on a new customer segment that was not part of their target audience before; young adolescents. They not only redesigned their apparel and accessories, but also redesigned their narrative in such a way that they were able to connect with millennials on an emotional level through different channels. The brand evolved from traditional runway shows and models into using role models and Instagram.

Following, the strategy of their parent company Kering Group, Gucci is focusing on their own channels to tell their story. By integrating their digital and instore experience, the brand was able to create an omni-channel strategy that makes their audience come back for more.

Underneath is the business model canvas of Gucci after 2015 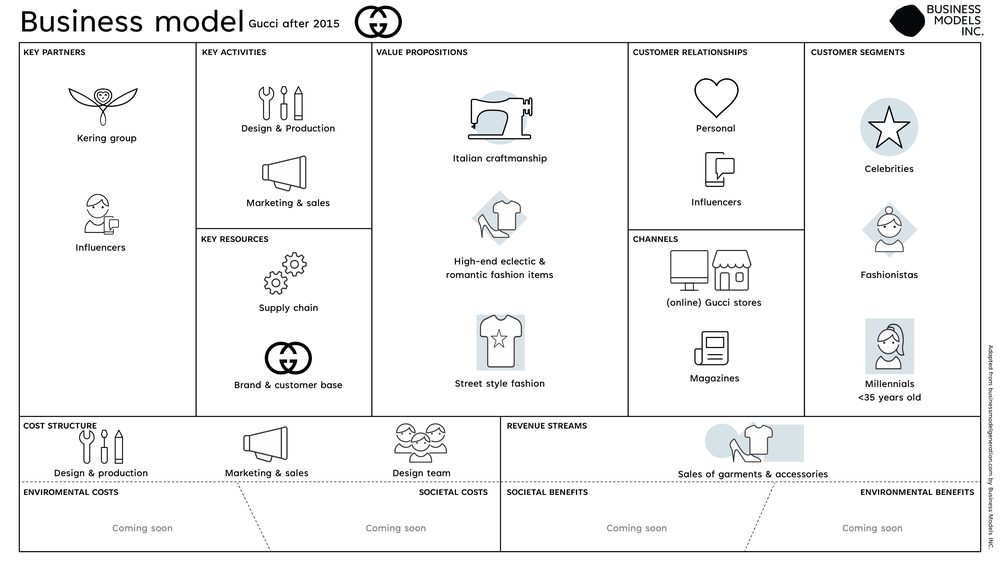 Predicting the future of fashion.

Stepping away from their physical business model and embracing the digital transformation was not easy for Gucci. The successful transformation of the brand is often used as the blockbuster story in the fashion industry. Currently about 50% of Gucci’s sales are coming from millennials, showcasing the success of their shift. The brand is working on an even stronger relationship with millennials so they can get them to buy into the brand image.

Therefore, the fashion house is currently implementing artificial intelligence in different parts of their business. They use it to forecast sales in their retail outlets, but more importantly it’s to leverage data generated by their tech-savvy audience. By truly understanding their customers behaviour, Gucci can predict what the future of fashion will look like.

More about the book